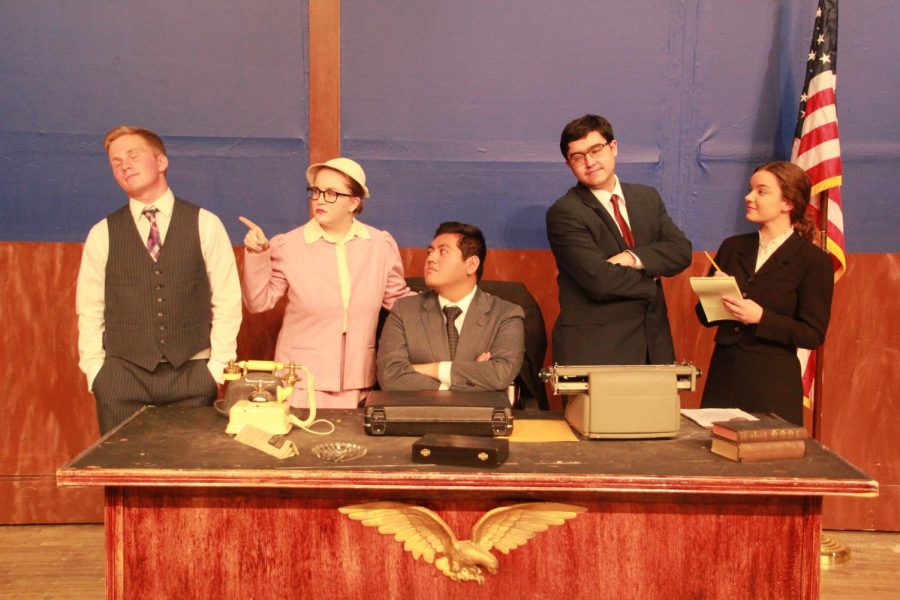 The Ambassador and his wife (Kevin Aragon and Bella Matthews, center) must travel, and someone will have to run their Iron Curtain Embassy in their absence. Although Mr. Kilroy and Miss Burns (Richard Davis and Genevieve Stroetz) are more capable, they decide to take a chance on their hapless son, Axel (Aiden Vrotny, left)—even though he’s already been expelled from several countries and the continent of Africa. Will Axel manage to avoid yet another international incident? Find out when Twin Lakes High School presents Don’t Drink the Water at 7:30 pm on November 12th and 13th. Tickets are now on sale in the TLHS Student Services office during school hours and at the door on the nights of the performances…

The Twin Lakes High School Theatre is proud to announce its upcoming production of Woody Allen’s classic screwball comedy, Don’t Drink the Water.  Don’t Drink the Water will be presented at 7:30 p.m. on Friday, November 12, and Saturday, November 13, in the Twin Lakes High School auditorium.  Tickets are now on sale and may be purchased from Mrs. Paige Barnes in the high school Student Services office.  For more information, call (574) 583-7108, ext. 2330.  Tickets selected in advance are $6, and seats purchased (assigned) at the door are $7.  Masks are strongly encouraged, but not required.

Don’t Drink the Water is a hilarious farce that takes place in the 1970’s in an American embassy behind the Iron Curtain.  As the show begins, Walter Hollander, a caterer from New Jersey (Kaleb Kiester), his wife, Marion (Emmalyn Rardon), and their daughter, Susan (Grace Marocco), run into the embassy two steps ahead of communist police who accuse them of espionage.  The embassy is not much of a refuge, though, for the ambassador is absent, and his bumbling son, Axel (Aiden Vrotny), now in charge, has been expelled from a dozen countries and the continent of Africa.  To make matters worse, Walter soon makes enemies out of the nefarious Commisar Krojack (Caleb Weiss) and Comrade Natasja (Maggie True) and insults a visiting dignitary, the Sultan of Bashir (Griffin McAtee).  Add Mr. Kilroy, the Ambassador’s pompous assistant (Richard Davis), Father Drobney, an eccentric priest/magician (Lars Spalsbury), and Francesca, a temperamental chef (Chloie Roth) to the mix, and the laughs never end!  Don’t Drink the Water was a smash on Broadway.  According to the New York Daily news, “The gags snap, crackle and pop!”  You won’t want to miss this fun-filled evening of laughter!

Don’t Drink the Water is presented in association with Concord Theatricals.