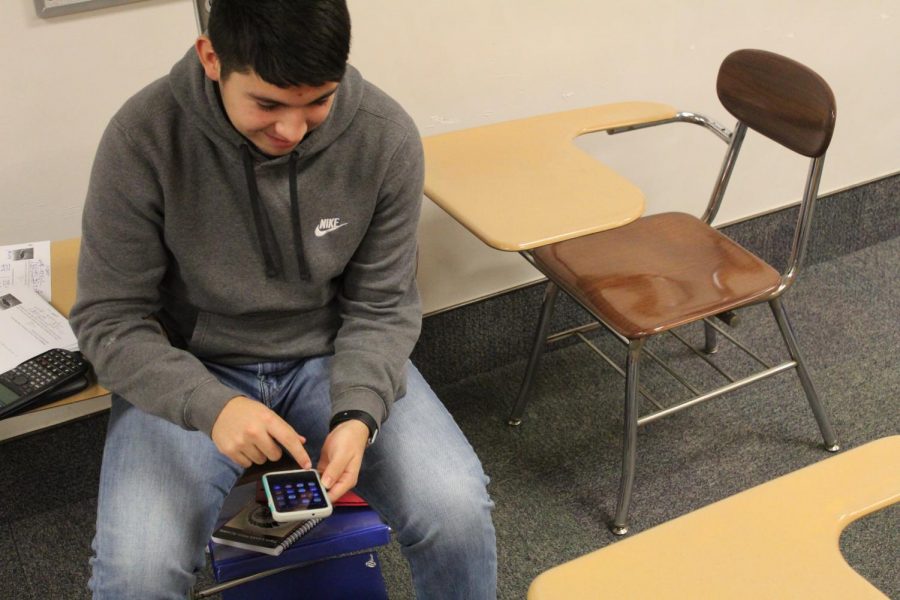 Salvadore DeLeon takes a look at an iPhone.

Junior Salvadore De Leon is one of Twin Lakes High Schools aspiring entrepreneurs. He takes broken iPhones and makes them look new again by replacing their cracked screens. He has been repairing iPhones since he was in the eighth grade and works out of his home. Salvadore enjoys helping people out, mostly other Twin Lakes students, by giving them a cheaper way to fix their phones.

A quick search of Google asking how to learn to fix iPhone screens came back with several options. There are 6-8 phone repair schools that cost anywhere from $1,200 – $2,000 and take anywhere from 3-5 days to complete. You can also learn the skill at some community colleges and trade schools. De Leon took another route, a popular option. He looked to the internet, namely YouTube and Google to teach himself the skill.

The average price to replace an iPhone screen that is not under warranty is $150 – $600 depending on the LCD or digitizer layer. Salvadore does basic repairs and saves customers an average of $100, but that can fluctuate depending on the model and the extent of the damage. It is worth noting that Apple will retract all warranties on a phone that is repaired by outside sources.

He doesn’t plan on pursuing this full-time after high school saying, “It’s more of a hobby for me that makes me some extra money on the side.” One of his customers, junior Brant Walts, said, “I got my phone screen replaced while I was at practice, for half the price all other places had to offer.” Brant went on to say how convenient it was and that it saved him over $100. When asked why he took his phone to DeLeon Brant said, “He reached out to me and asked if I’d be interested in allowing him to fix it. He was the cheapest, so I agreed.” Brant continued that  Salvadore did a great job and he would use him again if needed.

De Leon works at a pig farm on the weekends and is on the Twin Lakes Winter Percussion Ensemble.