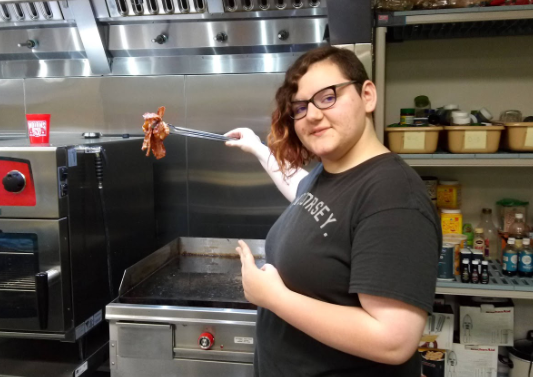 While cooking our own pizza the problem of bacon arouse. Ash cooked the bacon to perfect crunch. Ash “Bruh look at all this bacon!”

It is pizza time this week for the Culinary class. This week will Culinary be making their own homemade custom pizza in class. The Culinary class is also doing custom-built pizza take-home meal. Along with making pizza, they are learning about fruits and how to cut them.

On Wednesday, January 22nd Culinary class made homemade pizza. They created a Mellow Mushroom copycat dough for the crust. Then they rolled out the dough into a circle with a 14-inch diameter. The crust started to bake and the smell of bread fills the Culinary room. The crust turned out thick with a sweet and savory taste. After the crusts were done culinary students were able to choose a large variety of toppings from mushrooms to ham. So many students got creative by throwing together as much topping that could fit on there pizza. While some stay a little bit traditional like plain cheese or making a supreme pizza.

Friday, January 24th Red day’s Culinary class made a pizza take-home meal. The take-home meal allowed the buyer to choose a sauce, Alfredo, basic pizza, ranch, or buffalo. The buyers also choose from a slew of toppings where they could choose from veggie selections, which are seen as follows: tomato, onion, spinach, pineapple, and canned mushroom; furthermore, bacon, sausage, pepperoni, and ham were selections for meat. Each pizza was baked to be 14 inches in diameter with a semi-thick crust. There was also a garlic butter glaze for the crust, and pizza had a fine garnish of parmesan and Italian seasonings. The Culinary class had sold eight pizzas, one with Alfredo sauce and another sauced with barbeque.

Experiences like cooking for others is an amazing reason to join the Culinary class. By joining Culinary you get to learn different ways on how to prepare food and also how to present it. You even get to learn how to attend to those with allergies and try new recipes. Another thing learned withing Culinary class is the specific way to help the nutrition of others. Learning how to cost out the recipes made in Culinary class is another valuable reason to join or just learn about Culinary. We asked Kyle Frewerd why you should join Culinary class, and he had this to say “It’s fun and I get to try out new things.”