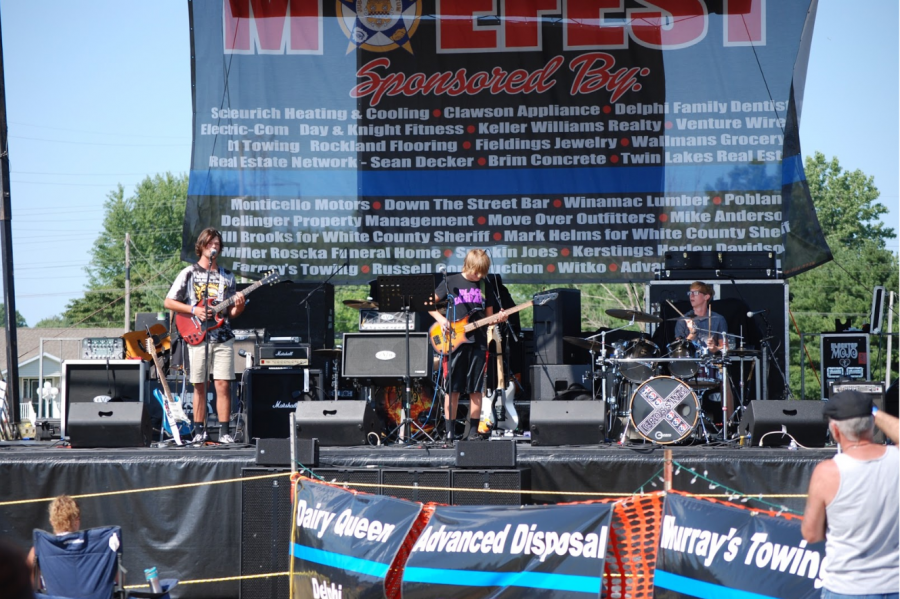 Burning Grove performing on stage in front of a live audience for the first time. They performed at Moefest on August 3, 2019, at Pine View Golf Course in Monticello, IN. Jalen Shidler on the guitar and vocals, Avery Shidler on the bass, and Brandt Minnicus on the drums.

Have you heard the band, Burning Grove? Well if you haven’t it’s a band made up of the Twin Lakes High School Students: Brandt Minnicus, Jalen Shidler, and Avery Shidler. Each band member has a key role: Brandt plays the drums, Avery plays the bass, and Jalen does the vocals and plays the guitar. What kind of music do they perform, you may ask? Right now, they do covers of certain rock songs, and they write their own songs to perform. They have practiced very hard to get to where they are today, and now they have begun performing for live audiences.

On August 3rd, Burning Grove performed for the first time at Moefest and Brandt stated, “Moefest was awesome, there was a big turn out, and it was a huge stage for our first show.” The audience was amazed by how well they performed, Breanne Nelson stated, “I came to Moefest to see them perform, and I am happy that I came because they performed very well and I got to hear their first live performance.” The band will be performing again on October 8th around 6 p.m. at the gazebo on Main Street. The band is looking forward to another show, Jalen Shidler explained, “I’m really excited to get to play again, it’s my favorite thing to do and I especially love getting to perform with my friends.” So, if you like live music and want to support your fellow Twin Lakes Students, come out to the gazebo on Main Street and groove with Burning Grove.